We were warned against staying in Pisa.  I think the warning came after we had already booked a two bedroom apartment a block away from the Leaning Tower.  It is another case where low expectations led to a pleasant surprise for the five of us.  Who would have thought looking at building with a 5 degree tilt would be amazing?  Tourists everywhere posing as though they were holding the tower up.  A few were posed to make the picture appear their finger was on top of the tower.  It was interesting to watch the communication between the picture taker and the one posing.  Only one couple was trying to get the shot of the wife pushing the tower over.  Their communication was clearly broken. The picture taker tried repeatedly to change the pose, without success.

Strangely, it felt good to be amongst so many tourists.  Unlike Albenga, in Pisa there were Brits, French, German, Chinese, and Spanish in family clusters and in big tour groups of 20 to 25.  We did not detect American accents.  It was nice to hear English with a Bristish accent.  We talked with a Londoner with his girlfriend.  He was a snowboard instructor in the Alps and talked about 900 eur tips and working with a high end clientele from Russia.  His girlfriend had worked on cruise ships for the past years.  They had to depart to board their cruise ship.  They mentioned it would have been nice to spend more time exploring and relaxing on land.

When locals asked us where we were from, they smiled when we told them the US.  With big grins they said, “Americanos.”  It is nice to feel welcome.  It is feeling we have had for the past six weeks.

The Leaning Tower was designed to be a bell tower for the adjacent cathedral.  The Tower was started in 1173.  Due to the lean construction stopped after the first three floors were completed.  99 years passed and it was assumed the ground would have settled.  To compensate for the lean additional height was added to the side of the wall that was tilted.  The additional weight on that side increased the pressure on the base and caused further lean.  The weight on the base was calculated to be 14,500 tons.  For 900 years the tilt increased by 1-2 mm annually.  To avoid the eventual collapse in 1964 a team of engineers and historians gathered to come up with a plan to stabilize the tower.  They used an 800 ton lead counterweight buried in the ground opposite the lean.  More details at: www.leaningtowerofpisa.net. 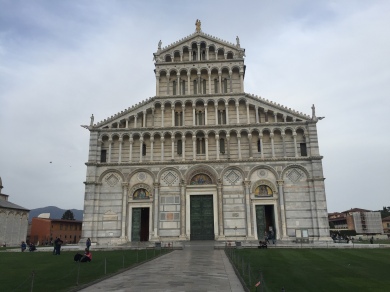 Rachel stands at the base of one of the 24 largest pillars holding up the cathedral.  Each pillar is a solid stone that has a base diameter of about 4 feet.  They extend up approximately 30 feet high.   Imagine in the 10th century they were able to quarry, cut a single stone into a column, move it Pisa, and then stand it upright. For the main columns this had to happen 24 times, without one column toppling another.  I did not count the other supporting columns but there were at least 30 of those.  Amazing engineering.