The headlines read, “Strike Paralyzes Athens.”  Fortunately our apartment is in the heart of Athens and we did not need to use buses or the subway. Thus, we were able to walk to the Temple of Zeus, the Arch of Hadrian, and the Acropolis. Our first stop was the Temple of Zeus.  Surprise, gates locked and no one in the ticket booth.  Apparently, civil servants were out on strike too.

Since the Temple of Zeus was closed we headed toward Plaka.  On the way, we came across the Arch of Hadrian.  Similar to Temples of Zeus, there are many Arches of Hadrian across the Roman world.

Below is a picture of our apartment, we are on the fifth floor (sixth floor-the we count in the US).  Our balcony is the second from the top.  To the right is a pedestrian walkway that bisects our street. 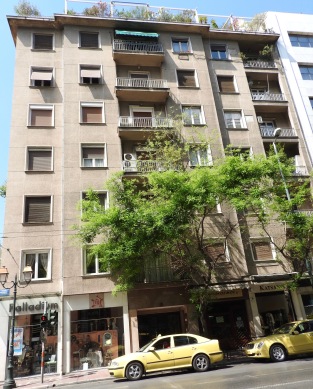 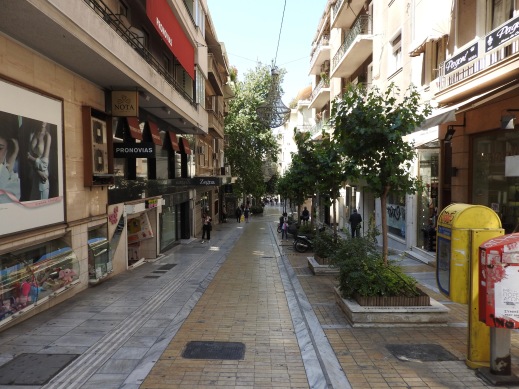 On Sunday morning we heard noise coming from our balcony doors.  It sounded like a matching band.  All five us went to the balcony and looked in the direction of the beating drums. There was no traffic on the street, and the police had blocked a side street, so no cars could enter our street.  We did not have to wait long till the demonstrators arrived complete with a band leading the march.

The following warning was at the US Embassy,

“Even demonstrations intended to be peaceful can turn confrontational and possibly escalate into violence.  You should avoid areas of demonstrations and exercise caution if in the vicinity of any large gatherings, protests, or demonstrations.”

What we saw was extremely peaceful.  If you looked at the video on a large screen, you see demonstrators nonchalantly talking to each other, as well as mothers and a few children.  It seemed more like a thanksgiving parade than an angry protest march.