We used Hyatt points to stay at the Hyatt Place at the airport. Free breakfast was a bonus. It gave the girls a lot of options from which to choose. Although Marcia had explicitly requested adjoining rooms, something was lost in translation. We had adjacent rooms without the connecting door in between the two. The girls were fine with it.

For the last three weeks the continent of Europe has had more than its share of rain. It seemed to rain everyday, but there were often periods during the day where the storm clouds gave way to sun and we enjoyed temperatures in the high 60’s to low 70’s.

On our first morning in Amsterdam we got up at 6:30, headed to breakfast, took the shuttle to airport and from the airport took the express train to Amsterdam Central. From there we walked 20 minutes in drizzle that alternated between light and heavy. We arrived at the Anne Frank house minutes before our reserved tickets.

In the first room, the girls grew quiet, reading the quotes and descriptions on the walls. They remained solemn as we traversed the rooms and stairs to the small rooms that Frank family lived.

Both Marcia and I had previously visited the house. It had been at least 15 years for me and for Marcia closer to 20 years since our first visits. For both of us, the second time was a different experience. Marcia commented on the fact that they had added rooms with displays and videos on the first and second floors.  The new additions did a nice job of orienting the visitor to the Frank family’s experiences before the rise of Nazi Germany. 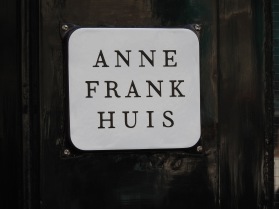 Another contrast was the density of people moving through the house. They tried to control the crowding  with an online reservation that limited the number of people entering in 15-minute intervals. Nevertheless, we moved from room to room with a large crowd of tourists. Unlike my first time, the others around us did not seem as affected by the experience. I did not feel the heartache in the rooms. This time it had the feel of being at a crowded museum looking at one of the paintings that was featured on the audio tour. People were respectful but not as emotional as my first time. My fear is that as time passes, the Holocaust will become more and more distant and less real to the visitors.

Amsterdam has to have the greatest density of bicycles of any city on earth.  Below is a shot of bicycles parked by the Amsterdam Central train station.